In our last post, we looked at how to access iPod Library tracks and stream them from disk in real time, using Apple’s Extended Audio File Services and Audio Unit APIs. We also speculated about the possibility of modifying our code to allow for reverse playback of those streams – you know, so you can hear what stuff sounds like when you play it backwards.

These days, of course, reversing an audio file – or some section of it – is pretty much a snap: just open the file in an audio editor (Audacity is very capable – and free), apply whatever reverse effect is available to flip the samples around, and save the result as a new file. Online services that perform this service for you are quite common: you upload a file, wait a little bit, and back it comes, nice and backwards.

But that’s not playing a file in reverse; that’s playing a previously reversed file in the usual (forward) manner and its not what we want, No. What we want is to stream audio files from disk, in real time, and reverse direction as playback is occurring. In other words: we want the ability to read through the file, from disk, in reverse.

Now, technically that’s not exactly practical: most audio file-reading APIs (Extended Audio File Services, included) don’t read samples from a file one-by-one – that would be far too inefficient. Instead, they read them in blocks of (for example) 1024 samples, then they process the whole block in one go before shipping it out to the hardware. And the samples in those blocks are usually acquired using the same strategy: you open the file, set the ‘playhead’ to a specific location and grab the next block of samples from that point forward.

This makes reading an audio file in reverse something of a challenge, but it also suggests a solution: if we could read our forwardly-arranged sample blocks in reverse order, and at the same time reverse the order of sample frames within each block, we might be able to achieve on-the-fly reverse playback. Let’s have a look at how we might do that.

If you’d like to follow along, download the starter demo project and open it up. (Alternatively, a completed version of the demo can be gotten here, on Github.)

This is essentially the same player we set up last time around, but with a few modifications: 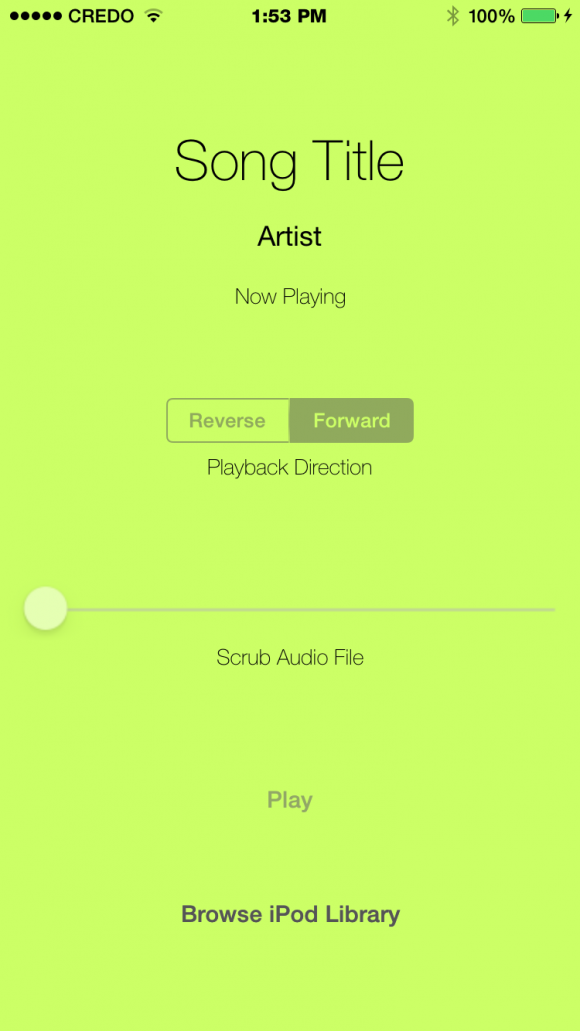 Run the project (on a device, not the simulator) and you’ll see it behaves much as before: we can browse the device’s iPod Library, choose a file, play it and pause it. In addition, we can now scrub to random locations within the file, and when playback reaches the end of the file, it loops back to the beginning.

As we pointed out last time, if you check the app’s memory footprint in the Debug navigator you’ll find that it is in fact quite small, and for good reason: we’re streaming our audio file directly from disk rather than loading the entire thing into memory.

The Reverse segmented control doesn’t do anything, of course, since we haven’t implemented reverse playback yet – that’s what we’re here to talk about!

The first thing we need is a way to indicate what the current playback direction should be. Add a new property to FileReader.h:

Next we need an @IBAction for setting the reversePlayback flag when the UISegmentedControl is toggled, so let's add an action method to ViewController:

Don't forget to wire this action up to the UISegmentedControl's "Value Changed" event in the Storyboard!

Finally, head down to the readFrames: method and replace the line _frameIndex += frames; with the following:

This is actually fairly straightforward:

If, at this point, you were to comment out everything in that code block except for the decrement of _frameIndex, you'd get a nice demonstration of why merely reversing the index is only a partial solution: the sequence of reads does indeed move backwards through the file, but the sample frames in each read block remain arranged in forward sequential order. (If you decide to try this, be sure to first scrub to some location other than the very beginning of the file, before reversing playback.)

Let's take care of that now by adding the following method to FileReader.m:

So much power in so few lines of code:

The last thing we need to do is modify checkCurrentFrameAgainstLoopMarkers - which currently handles looping around when playback reaches the end of the file - to perform a similar check when playback is reversed and we reach the beginning of the file:

Try running the app, but with the following caveat: depending on the file you've loaded for playback - whether its compressed or not and, if so, how it was encoded and at what bit rate - you may (or may not) hear disappointing results when you reverse playback.

This means we have one more challenge to overcome.

Reversing playback on the fly like this works great for PCM formats where each sample frame consists of a single set of samples, spread across all channels at that point in time. It even works well for robust compressed formats like AAC and well-encoded, high bit rate MP3s.

But compressed formats present an inherent challenge: unlike uncompressed formats, the frames of a compressed file consist of blocks of encoded samples plus a header (at the beginning of each block) indicating how the samples in that particular block were encoded - information a decoder needs in order to decode!

So what happens ordinarily, when you're playing a compressed file and the next read lands in the middle of a block, without the header? The MP3 codec has a mechanism for retaining the header and samples of incomplete blocks, so they can be reunited with the rest of the block on the next read. Clever!

But you can see where this is going: read those sample blocks in reverse order and you've clearly subverted the entire mechanism! The result: buffers coming back from ExtAudioFileRead with entire swaths of their samples set to zero. Nasty!

What to do? One strategy is to seek to a location in the file prior to the data you're actually interested in, read in a greater number of samples (in the hopes of capturing the complete block of target samples including the header) and, after conversion, simply drop the extra frames.

This actually works surprisingly well, primarily because ExtAudioFileRead is optimized to be fast. Still, given the nature of compressed formats, it involves something of a gamble, which is: how can you be sure you've gone back far enough in the file to get the header data you need for the frames you actually want to read?

You can't. But by reading a fairly conservative number of extra frames, we can get pretty far with this idea. I'm only going to focus on detecting MP3 files because, honestly, I haven't had much trouble reversing other compressed formats.

Begin by adding a define macro to the top of FileReader.m

Typically, reading is done in blocks of 512 or 1024 sample frames so 4096 makes for a nice, comfortable multiple. If it seems excessive to be grabbing 4-8x as many samples as we would normally need, keep in mind that not only is ExtAudioFileRead very fast, but the way we're going to 'crop' our buffer is by simply reassigning its pointer.

Next, there should be a flag we can set when we're dealing with an .MP3 file. Add another property to FileReader.m:

And add this line to initWithFileURL, so we always begin life with isMP3 turned OFF:

For this to be useful, we need some way of ascertaining if the current file is an MP3 or not. Add the following method, which decodes the file's formatID flag (and then tests whether that flag indicates an MP3) to the bottom of FileReader.m:

Now, in openFileAtURL we can check (after we've retrieved the file's native format, of course) if we've got an MP3 and, if we have, set the flag accordingly::

With our flag and helper method in place, we can now add the necessary conditional code for reversing an MP3 file stream. Start by modifying createFileReadingBufferList as follows:

This sets a larger buffer size (using our define macro) for reading in the extra frames. Next, add the following to readFrames:, above the code that currently handles reversing:

All we're doing here is checking if we're currently reversing playback and, if we are, is the file we're reversing is an MP3? If we are (and it is), we (a) set our read size (framesToRead) to the kExpandedBufferSize macro we set up earlier; (b) have ExtAudioFileRead read framesToRead number of sample frames to a new float buffer; and (c) 'crop' the returned (and filled) buffer by resetting its pointer (which normally points to the first element in the buffer) to point instead to kExpandedBufferSize minus frames - which gives us the sample frames we were looking for in the first place. Thanks to the expanded read size, however, ExtAudioFileRead will have been able to completely fill those frames with properly decoded samples!

And there you have it: On-the-fly reversible playback, streamed right out of your iPod Library!